I have the privilege to attend this year’s Quilting Festival in Port Elizabeth with a ledgendary quilter who I have the honour to call “Ouma”  (Grandma) – Louise Rheeder.

The first National South African Quilters Festival was held in Bloemfontein in September 1989 and the SAQG  (South African Quilters Guild) – also called the Umbrella Guild in those days – were founded at this event. Ouma Louise was chosen as the Eastern Free State committee member. In 1990, at the age of 64, she received her Quilting Teacher’s Diploma and then there was no stop to her. She taught quilting to ladies all over SA including:  Senekal, Heilbron, Bethlehem, Ladybrand, Winburg and even in Lesotho.  Peace Corps approached her to teach woman in Lesotho different quilting skills to generate an own income for themselves.  During one of these visits to Lesotho, she was invited to drink tea with Queen Mamohatu!  The Matwabeng quilters nominated her for the Community Builder of the Year award where she won the Free State Senior category.  She used the money to buy some sewing machines for the ladies who nominated her.

My “ouma” is turning 91 this year but is still far from old ☺ I am so proud of her, her helping heart and positive attitude towards life. Thus I can state again what a privilege it is for me to attend this festival with her and still learn so much wisdom from her regarding quilting and life! 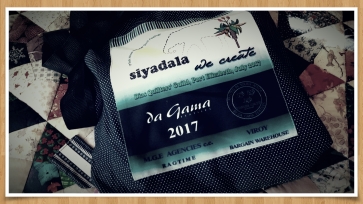 Some of the items we received on arrival at the festival. Our rooms were also decorated with beautiful quilts provided by the quilters from PE. Thank you!

Tomorrow I’m taking a free motion quilting class.  I can’t wait to learn a new technique and see what options it opens up for making home decor.  Will keep you posted…😉

One thought on “Siyadala Quilting Festival 2017 – with my Granny”